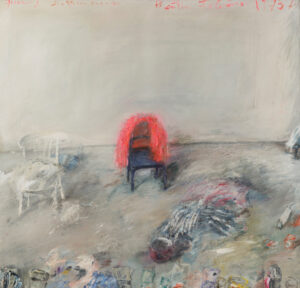 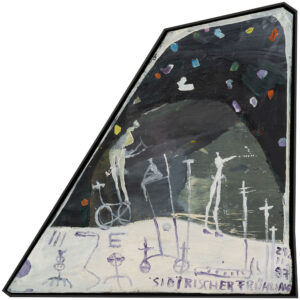 Balancing closeness and distance creates a new kind of community. Absence and presence, distance and attraction generate a diverse interplay.

In terms of content, the exhibition is on the one hand about the personal perspective of the guest curators. On the other hand, historical and current issues, different perspectives on the city and society come into focus. As a result, the exhibition shows the diversity of the collection.

A catalogue has been published for the exhibition and is available for purchase here: Publications The year 2020 was marked by the pandemic - and the question of proximity and distance left its mark on people's everyday lives, as well as on the work of the Berliner Volksbank curatorial team. Could we still provide safety with a physical distance of 1.5 metres? Was there closeness and a shared sense of "we" even in the virtual space of the video conference? Or more generally: does solidarity and community grow even / despite / because of spatial distance?

As topical as these questions were, there were also fundamental, philosophical thoughts on this subject. The parable "Die Stachelschweine" by the philosopher Arthur Schopenhauer, created in 1851, already addresses the dilemma of closeness and distance in coexistence: a group of porcupines has the need for physical warmth - at the same time, however, the neighbour's quills hurt the closer the individuals get to each other. It is therefore necessary to find the ideal distance in order to use the communal warmth without getting pricked by the other's quills. This conflict can be transferred to humans. On the one hand, there is the strong human need for closeness, for solidarity and community, for friendship and love. On the other hand, people also strive for individualism and self-determination - some have a need for peace and solitude.

In this field of tension between closeness and distance, it is important to find a balance. The challenges lie in the personal sphere, in the shaping of private relationships of all kinds: from love to friendship and family, to everyday encounters with others.

Living conditions in a big city, like Berlin, tests the ability for each individual to find his or her way in the hustle and bustle of anonymous crowds. At the same time, it is precisely the crowd of different people that makes the city so fascinating and lively. Community, cohesion and pleasure are contrasted with loneliness, isolation and forlornness.

The relationship between the individual and society, to the political situation and to history, can also be considered in terms of proximity and distance. It is a question of how strongly the individual allows his or her actions to be influenced by the social environment and, at the same time, how historical developments guide personal actions and feelings.

These questions are a source of constant new debates, considerations and reflections in order to determine and define one's own position. It is precisely with the means of art that the complexity of positive and negative emotions and needs can be depicted.

The Kunstsammlung der Berliner Volksbank focuses on figurative art, so unsurprisingly the image of the human being is strongly represented. Thus, the emotional state of man and the numerous related issues of man as well as the individual within society often become the subject of our art. The environment of the human being, the concrete, the metaphorical or the emotional space, also is repeatedly found in these works of art. Thus, it made sense to select works which included the idea of 'proximity and distance' and to approach it with a variety of artistic positions.

The main subject of the exhibition, Klaus Fußmann's "Atelier mit roter Jacke," sets the tone for the overall theme: Distance is created by initially missing the presence of a human being. At first glance, this distance is unsettling. However, what the depiction displays forcefully is the artist's personality. Although he has left his studio, the objects in the room, such as paint tubes and pots, demonstrate activity. The white wall stands for the space to be filled with art. The signal red jacket echoes the creative energy of the artist.

In contrast, Christa Dichgans uses countless small figures in "Begegnung mit den Ichs" to illustrate the many facets of her identity. In the foreground, she herself is seen painting an angel figure, which can be understood as a symbol of the departure and free creativity of artistic creation.

In Wolfgang Mattheuer's “Selbstbildnis," the artist shows himself with a brush in his hand as a "Bild im Bild”(picture in a picture) in the form of a portrait on an easel. Through the open windows and the reflections of the cityscape, Mattheuer opens up the studio space and refers to his surroundings: he allows the world from outside to permeate into his interior and thematises the interrelation in art, mirrored and transformed many times over. The complex process of stepping back to artistically survey the truth and at the same time reproduce it in detail is indicated by the interweaving of the two spaces.

Mattheuer's "Blinder Mann" leads the viewer into a group of works dealing with human loneliness. The monochrome painted figure appears petrified and sits without any connection to its environment in front of a dark background. The blindness illustrated by the closed eyes prevents contact with the surroundings.

This impossibility of connection is also shown in Ingeborg Hunzinger's marble sculpture "Über die Schulter." The block-like form of the figure prevents any interaction with the surrounding space; it is entirely focused on itself. She appears completely alone and left to her own devices. In her isolation, she is completely on her own. But the effect also varies: possibly the figure also protects itself from its environment, withdraws voluntarily and deliberately does not allow its surroundings to get close to it.

The figures in Wolfgang Leber's "Auf der Galerie" also move in isolation in a convoluted space, possibly a situation in a railway station or a shopping centre. The figures do not look at each other and their paths do not cross either, an encounter does not seem possible.

Karl-Ludwig Lange's "Fast im Warmen" further increases the isolation of the individual. The shadowy, frontal figure faces the viewer directly - but the blurring of the details and the cloudy colour scheme convey a concrete as well as metaphorical distance.

The juxtaposition of the need for closeness and distance is a recurring theme in the representation of love in art. In Ruth Tesmar's "Unter Wasser – Schweben," the silhouettes of a woman and a man move as if weightless in a blue room. Their bodies float next to each other and fit into each other's forms, yet they do not touch. In this poetic image, water can be understood as a metaphor for life: The couple floats through close to each other and each remains autonomous.

Hans Uhlmann's bronze "Weibliche Gruppe'' shows a touching image of physical intimacy. The formally minimalist bodies are drawn in a common outline, their arms resting on each other's bodies, while their heads virtually merge.

Angela Hampel's lithograph "Dich spüren will ich..." (I want to feel you), on the other hand, speaks of the longing for this physical contact, as the title suggests. The female figure illustrates the conflict of this desire. The figure with a piercing gaze puts her arm around her own shoulder as if she wants to embrace herself. In the other hand, she holds a serpentine animal, although it remains open whether it is being warded off or drawn towards her. The bald head refers to the feeling of defenselessness and vulnerability.

Ambivalent emotions are also the theme of Hermann Albert's painting "Sich kämmender Akt". A naked woman seems to feel unobserved in her room. But a shadow on the wall reveals a male observer. The threatening aspect of desire and love is illustrated. At the same time, the scene is also a statement on the subject of voyeurism in male-dominated art, in which the long artistic tradition of depictions of female nudity manifests itself.

At first glance, Markus Lüpertz's painting "Zwei Krieger" appears threatening. Two figures with archaic shields, sword and lance meet each other aggressively. Their faces, however, are covered with masks that appear rather amicable and open. The scene thus conveys an impression of the diversity of male adversaries, oscillating between curiosity and aggressiveness.

The bronze sculpture "Wanderer namenlos" by Sylvia Hagen presents three sketchily modelled figures. The main focus is on the stances of the bodies, which are turned towards or away from each other. The interplay of closeness and distance is inscribed in the "wanderers" on the path of life.

Gerhard Altenbourg's woodcuts work with the serial reproduction of a figure that is always the same. Lined up one after the other, they convey the uniformity of the anonymous mass of people. At the same time, the colourful design and the printed grain of the wood give rise to reflection on the simultaneous uniqueness of the individual.

Altenbourg's filigree drawing "Flug'' shows a single being, a mythical-mystical figure with wings, separated from its surroundings by the ability to fly. The head turned with a gentle smile, however, seems to indicate the existence of others.

Life in the city

Among the early works from the collection are Werner Heldt's charcoal drawings from Berlin. Here he observes scenes from post-war everyday city life, depicting gatherings of people as they often occurred in urban life at the end of the 1940s. In these depictions, the individual formally merges with the mass.

In Thomas Hornemann's "Cabaret la Marina" and Kurt Mühlenhaupt's "Sommerlicher Badestrand", the cheerful side of city life is illuminated. People get close to each other during leisure activities ranging from dancing in the pub to sunbathing, bathing and playing on the beach.

The confusion of the big city is the theme of Ulla Walter's work "U-Bahn". The human figures are dissolved into abstracted forms, yet the feeling of crowdedness, confusion and density is visible. The individual does not appear on the train, but is lost in the tangle of the masses.

Silke Miche's "Kästen" does not show people themselves, but their urban living situation. In the seemingly endless row of balconies, the conformity and narrowness of urban living space becomes clear. The bright colours, however, dissolve the oppressiveness and hint at the individuality of the residents.

With the political turnaround after 1989, a fundamental political and social change occurred in German history, which found artistic expression in subtle ways.

In the painting "Sibirischer Frühling," Cornelia Schleime illuminated her personal situation when she left for West Germany in 1984 after great pressure from the GDR authorities. The painting shows a snow-covered landscape, a distant "Siberia" from which she was now able to distance herself. The colourful dots as well as the “Frühling” (spring) implied in the title symbolise her optimistic mood of departure.

Wolfgang Peuker's 1990 painting "Pariser Platz II" is quite different. A leaden grey impenetrability dominates around the Brandenburg Gate. Although the gate has been opened by the fall of the Wall, the world beyond the gate seems infinitely distant. One intuitively tries to avoid an encounter with the eerie dark figures that come from there.

Harald Metzke's "Blinde Kuh" is also ambivalent, a painting that at first glance seems to be depicting a cheerful party game. Yet, as is so often the case with Metzke, the painting can also be understood as a metaphor for social interaction. The blindfolded woman is trying to touch the other people. She is trying to make contact with them. If one considers the genesis of the work in the German post-reunification period, it could also be a commentary on the encounter between East and West Germans. The not-seeing with blindfolded eyes is symbolic of the not-knowing and not-understanding in the attempt to come together - and the evasive fellow players also underline the failure of the encounter.