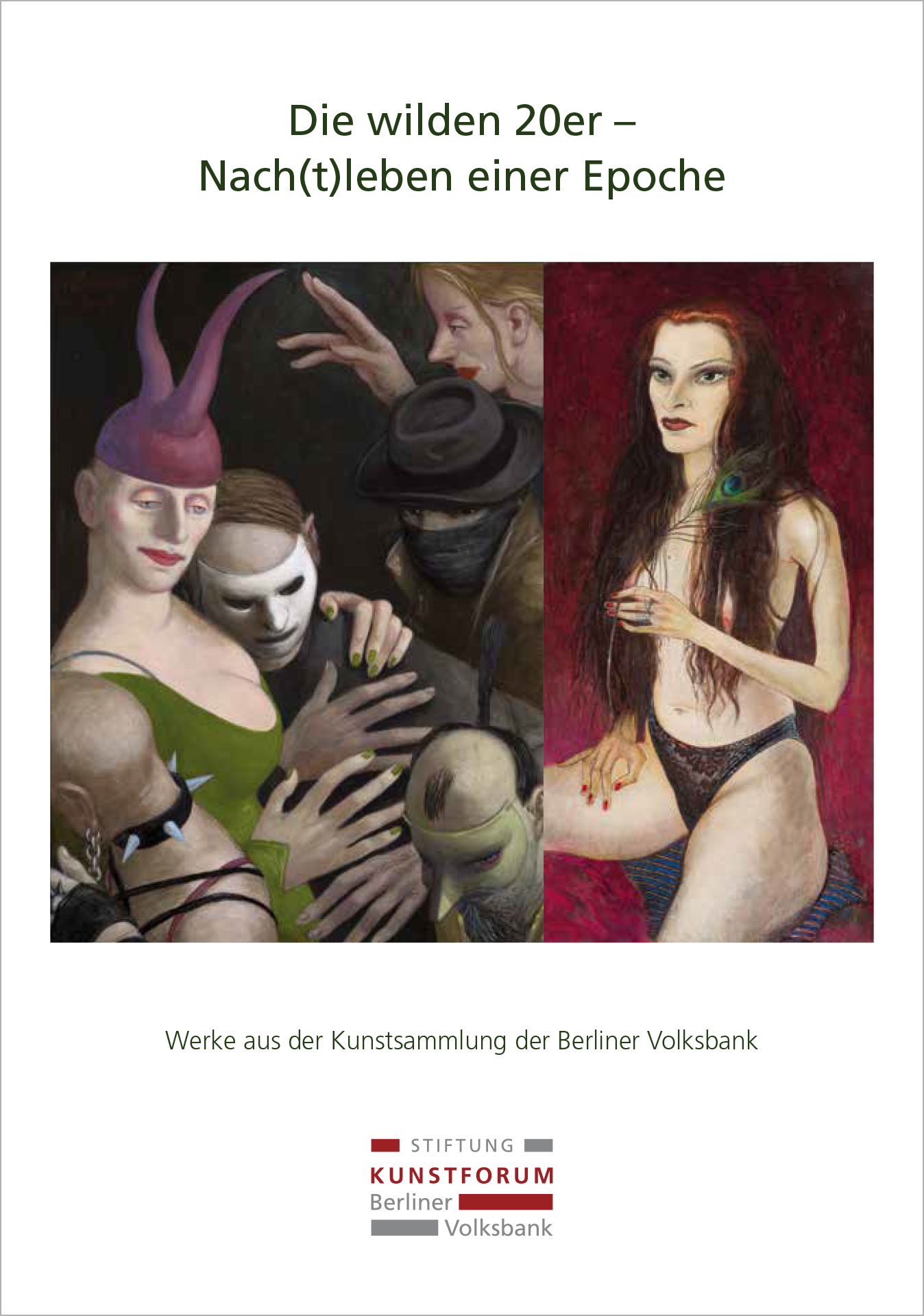 The presentation at the Kunstforum der Berliner Volksbank showed how the 1920s era has influenced the artistic work of later generations up to the present day.

The 1920s still fascinate people a hundred years after this exciting epoch. This is reflected in the success of series such as "Babylon Berlin," but also impressively in the fields of design, modern literature and current fashion.

Art reacted to the 1920s in its own time with styles such as New Objectivity and Magic Realism. The exhibition "Die wilden 20er - Nach(t)leben einer Epoche." (The Wild Twenties - The Afterlife of an Era) shows the extent to which later generations of artists were inspired by these styles and still are today. The exhibition shows works by Gudrun Brüne, Albrecht Gehse, Hubertus Giebe, Otto Gleichmann, Clemens Gröszer, Karl Lagerfeld, Hartmut Neumann, Roland Nicolaus, Wolfgang Peuker, Bernard Schultze, Volker Stelzmann, Christian Thoelke and Britta von Willert are presented.

The artworks were created from the 1970s to the present. They bear witness to how influential this epoch was in terms of style, and that later generations of artists also made reference to the clear, austere representationalism of New Objectivity and the surreal and alienated scenes of Magic Realism.

A catalogue has been published to accompany the exhibition and is available for purchase: Publications

The Berliner Volksbank art collection focuses on representational art, which was mainly created in Berlin and the surrounding regions after 1945. The collection, therefore, contains the most diverse range of positions in German modernist art, from expressive forms of expression to old-masterly realist painting to strikingly reduced viewpoints. One group of works stands out for its precise, almost emphatically realistic painting style as well as its naturalistic rendering of colours, volumes and perspective. At the same time, they show alienating effects such as lighting conditions reminiscent of nocturnal visions or dreams, or exaggeratedly dramatic gestures. Some paintings are permeated by a mysterious atmosphere and encourage the viewer to consider the particular mood in each case.

The earliest paintings of this kind from the Berliner Volksbank art collection were created in the 1970s, such as "Nachtcafé" by Hubertus Giebe. A whole series, on the other hand, dates from the last 20 years, such as the works by Clemens Gröszer, Volker Stelzmann, Wolfgang Peuker or Gudrun Brüne. The painting style of these artists is reminiscent of the overly precise style of verism of the 1920s.

During the Weimar Republic, currents that were more strongly oriented towards seen reality, such as Neue Sachlichkeit (New Objectivity) or Magical Realism, became increasingly prevalent in German art. After modernism had broken with traditional forms of representation around 1900 - Impressionism with the idea of uniform light, Expressionism with naturalistic colouring or Cubism with classical perspective - a "return to order" was evident in art throughout Europe. After the horrors of the First World War, artists in Germany strove for a new objectivity and an unsparing depiction of what they saw. The uncovering and criticism of social ills and societal ambivalences were to be visualised in this way. Other artists painted scenes that only appeared realistic at first glance, but on closer inspection revealed breaks with familiar reality and made the uncertainties of the social situation visible. A lively and thoroughly diverse art scene illustrated the 1920s. From the boisterous celebrations of the bohemians in the cities and their dance on the volcano to the new understanding of the role of the modern woman to the enormous social problems and the gap between rich and poor, everything was thematised. This short era came to a brutal end when the National Socialists came to power in 1933, bringing this cultural flowering to an abrupt end.

The question arises as to why artists such as Clemens Gröszer, Volker Stelzmann, Hubertus Giebe, Wolfgang Peuker or Gudrun Brüne reacted so forcefully to the style and themes of this period many decades later.

By the mid-1960s, a first renaissance of the visual language of the 1920s had already emerged in the eastern part of Germany. At the Academy of Visual Arts in Leipzig, a figurative art movement emerged that broke through the narrow guidelines of the "Socialist Realism" prescribed by the state and revived the painterly, technical refinements of various art historical models. The so-called "Leipzig School," still famous today, was born. Werner Tübke, Wolfgang Mattheuer and Bernhard Heisig also took their cue from greats of the 1920s such as Otto Dix, Giorgio de Chirico, Oskar Kokoschka and Max Beckmann. In Tübke's work, the examination of older art, especially Renaissance and Mannerism, played a major role. The artists of the 1920s had already turned this gaze to the past. In a sense, one can speak stylistically and technically of the renaissance of a renaissance, which was, however, thematically related in each case to the current present. The art of the "Leipzig School" established itself through its three main protagonists and was carried on and developed by its numerous students at the Leipzig Hochschule. Two stylistic currents dominated: painting in a veristic, precise glaze technique and painting in a gestural, impulsively designed pastosity.

In the 1970s, Giebe, Stelzmann and Peuker studied at the Hochschule für Grafik und Buchkunst. They found models for their own artistic work in the examination of Otto Dixs’ work, but also of Giorgio de Chirico, a representative of the Italian Pittura Metafisica, which developed parallel to Magical Realism in Germany. For Giebe, Max Beckmann was an exciting inspiration, Stelzmann dealt with even older masters of art history such as El Greco or Pontormo, while Peuker developed his own variety of Magic Realism. Each of the artists thus arrived at a very personal style.

Thus the art of the Leipzigers succeeded in the balancing act of, on the one hand, ostensibly conforming to the desired line of GDR art policy, setting itself apart from the West through representationalism, and thus enabling itself to work artistically in a more or less undisturbed manner - on the other hand, possibilities opened up for making its own and independent pictorial statements, precisely through alienation and profundity. Thus, the direction of Magic Realism, which originated in the 1920s, offered many artists in the GDR an approach of using enigmatic elements and numerous layers of meaning to refer to the pictorial statement that was actually relevant to the artist - only that this was not apparent at a superficial glance.

Common characteristics of the artists such as Giebe, Stelzmann and Peuker are the precise lines, the attention to detail and the finely glazed layers of paint as well as the surreal and magically charged subjects. Moreover, they have maintained their respective individual styles even during the Wende and post-Wende periods. It seems that the visual language they found was suitable for vividly depicting their own feelings even in the face of social and personal changes.

Other examples of artists who transferred this style of painting, which borrowed from the art of the 1920s, into their handwriting are Gudrun Brüne, who trained in Leipzig and then worked as a lecturer at Burg Giebichenstein in Halle, and the two Berlin painters Clemens Gröszer and Roland Nicolaus.

Gröszer often created complex narratives with his works, using multi-layered references from all eras to create a conundrum of human longings, dreams, hopes and expectations. He incorporated allegories and symbols into his works, interweaving the worlds of dream and fantasy with elements from his everyday life. Thus his figures, who reside in mysterious shadow worlds, are dressed in the chic of the contemporary underground scene, while a masked magician may be standing next to the S-Bahn station at Berlin's Alexanderplatz. Gröszer transposes an ancient way of painting into his present, while the technical perfection of painting was also always a major concern.

"Early on, Gröszer belonged to the group of painters who attempted to rescue genuine painterly ideas from the ingredients of the crisis, the loss of autonomy, media competition and the new, commercially determined cultural sign system, so to speak." (Matthias Flügge, in cat. Gröszer - Antlitz, 2012, p. 11)

Gudrun Brüne's work also focused on painterly precision, while at the same time her work is permeated with symbols and allegories of human existence. Her work often mixes genres: Portraits are combined with still lifes and figures enter into silent dialogues with things. Dream and memory images are merged with real scenes from Bruene's studio. The objects, such as dolls, masks, mementoes, play a symbolic role that underlines the overall effect: the outside world is reflected in the inside world of the studio.

Roland Nicolaus deals with the 1920s in a special way. In his most recent works, he combines various painterly styles, from meticulous detail painting to bold Pop Art, and creates collage-like panoramas. This is also a conscious reference to the 1920s since the principle of collage first emerged in this period with the Dada movement. In these painted collages, sometimes supplemented by pasted-in evidence of everyday culture, Nicolaus picks up on figures, observations and phenomena of social reality in Berlin in the 21st century and presents a moral image of the present. Through quotations from art history in constellations and figures, he reveals distortions and absurdities of the social reality of the present, in which he certainly sees parallels to the 1920s in Germany in terms of content. The result is a bitterly wicked commentary on the present situation.

This magical-surreal direction in the art of the late 20th century, which forms a significant part of representational art in Germany, does not, however, find an endpoint with the generation of artists trained in the GDR. The fascination with painterly accuracy, the detailed formulation of the superficially visible in connection with subtly hidden levels of meaning is continued into the present by younger generations of artists.

Britta von Willert, for example, who trained in the early 2000s, has also opted for representational painting, modelling figures and spaces with realistic precision. At times, she incorporates conceptual images into the depictions and shows an openly conceived tradition of the magical-surreal, as in her series of Berlin paintings, which make the place's known past visible in figures taken from historical black-and-white photographs of the early 20th century and create suspenseful cross-fades. In other works from Berlin's nightlife, the quiet atmosphere and introverted figures recall the depictions of the American painter Edward Hopper. In the 1920s and 1930s, Hopper visualised the loneliness of modern man and the alienation of city life.

Depicting the social issues of the present in the relationship to human emotions is also the aim of Christian Thoelke, who studied in the years before and after the turn of the millennium. His paintings are dominated by what at first sight appears to be a calm mood, but on closer inspection is also perceived as latently sinister and charged with tension. It is about universal questions of man in relation to upheavals, uprooting, transitions, fears and longings. The social themes are not depicted narratively but made visible in their essence and core. The painterly sharpness of detail and precision in Thoelke's painting is reminiscent of New Objectivity - but it also betrays the inspiration and stimulation of his teachers Wolfgang Peuker and Ulrich Hachulla, both of whom carried on the technical care of the "Leipzig School."

The art of the 1920s thus continues to have an effect today and inspires generations of artists. Their approach and style offer a possibility to transfer the questions and observations of one's own reality of life to art, independent of contemporary styles and fashions. The accuracy of the technical realisation goes beyond subjective ego-feeling and the expression of personal sensitivities. The precise description of things as well as the mysterious enigma and great atmospheric tension make it possible to visualise thoughts on the social situation without appearing narrational and striking. Instead, the viewer's thought process is stimulated in a subtle way and his attention is challenged for nuances and intermediate tones. This is what makes this style of figurative art so appealing and fascinating, a style that, in a way, is timeless and endures into the Post-Post-Modern era.